It is invested and developed by Yunnan Construction and Investment Group and Vientiane Capital Authority. The development zone is a key cooperation project between the government of China and Laos. It is also recognized as a state-level overseas economic and trade cooperation zone of China and a special economic zone of Laos, respectively.

It has been written into the Action Plan for a community of Shared Future. By adhering to an integration model of industry and city, the zone has identified its function as an industrial park and a new city of Vientiane, and attempt to invest approximately 5 billion U.S. dollars. 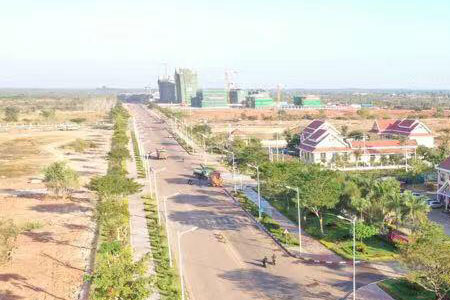 So far, SDZ has completed the first stage of infrastructure construction which covers an area of 4 square kilometers, attracting nearly 100 enterprises to sign the contract. Nowadays, SDZ is working for the second stage of construction for basic infrastructure and other supporting facilities to create a new city of Vientiane that is “green, ecological, tranquil and modern”.

In July 2020, China and Laos signed a document with regards to the cooperation in establishing the Saysettha Low-carbon Demonstration Area in Vientiane. According to the contract, China will provide aid to Laos in addressing climate change, including solar LED street lamps, new-energy buses, trucks, together with other vehicles and monitoring equipment. China also works out a plan for the low-carbon demonstration zone.

The establishment of a Low-carbon Demonstration Area will accelerate the ecological development of SDZ, promote South-South Cooperation for climate change, and facilitate international industrial capacity cooperation.

With these efforts, it is expected that the development of Vientiane New City could be a model of a low-carbon and environmentally-friendly city in Laos and even broader Southeast Asia.

Sihanoukville gears up for 9th edition of Sea Festival