Newly released pictures give an unprecedented view of the 3,000-year-old relic, which was removed from its Egyptian tomb for the first time in July so it could be renovated at the Giza’s new Grand Egyptian Museum.

Intricate designs featuring what appear to be ancient Egyptian gods can be seen engraved at the foot of the coffin, which is made of wood and gilded with gold. Antiquities Minister Khaled el-Anany told reporters today that the restoration of the casket will take at least eight months.

He said the gold coffin is in a fragile state having ‘never been restored’ since it was first discovered by British archaeologist Howard Carter in 1922. 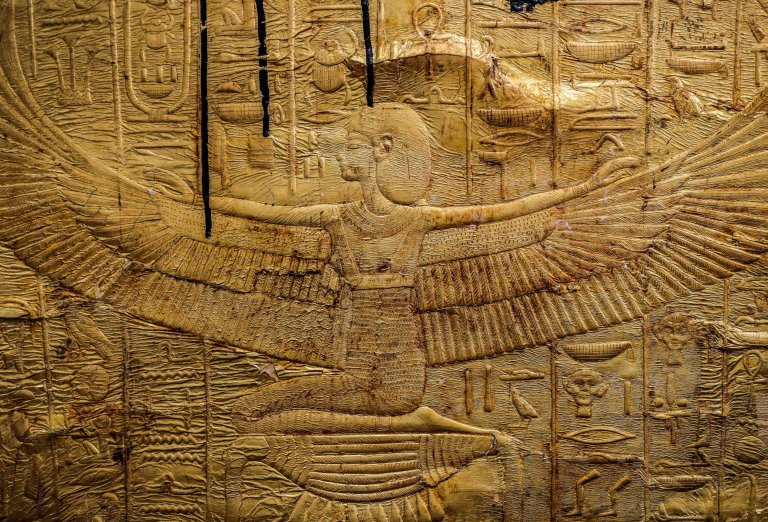 The coffin, which measures 7.3ft long, was removed from the tomb in a tight operation and fumigated for seven days. Non-invasive work will now be done to repair the cracks in the golden wood.

Tutankhamun ascended to power aged nine and stayed as ruler until his death at the age of 18.  His body was mummified and placed in the tomb, which contained three different coffins built one into the other.

While the outer one was transferred for restoration, the other two have remained at the Grand Egyptian Museum. The innermost one is made of solid gold while the middle coffin is made of gilded wood and in-built with multi-coloured glass.

Once the gilded casket has been restored, it will be exhibited at the museum, making it the first time the three are showcased together. It is expected the public will be able to admire the coffins, along with other artifacts belonging to the king, by the time the museum opens in 2020.