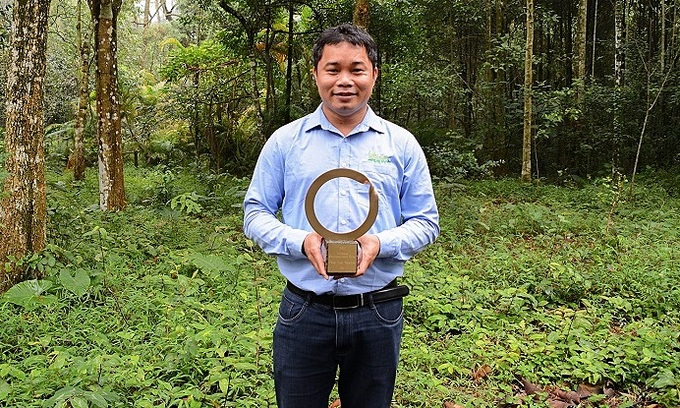 Nguyen Van Thai, 39, is the director and founder of the non-profit Save Vietnam’s Wildlife (SVW), which helped rescue 1,540 pangolins from the illegal wildlife trade just between 2014 and 2020.

Instituted in 1989 the Goldman Environmental Prize, known as the ‘Green Nobel,’ seeks to “honor grassroots, environmental heroes, by recognizing individuals for sustained and significant efforts to protect and enhance the natural environment, often at great personal risk.”

Thai said he was “surprised” to be a recipient of the prize.

“I am very proud as all efforts in wildlife conservation have been recognized, not only in Vietnam, but around the world.”

Thai is the second Vietnamese to win the award after Nguy Thi Khanh, director of Green Innovation and Development Center, who received it in 2018 for doing research that prompted government agencies to take up long-term sustainable projects that have helped reduce dependence on coal.

Pangolins are considered the world’s most heavily trafficked mammal despite an international ban on their trading, reportedly accounting for as much as 20 percent of all illegal wildlife trade as heavy demand for their meat, scales and blood threatens them with extinction.

All eight pangolin species across the world are on the International Union for Conservation of Nature Red List of Threatened Species.

The animal is hunted in Vietnam and neighboring countries for its meat and the alleged medicinal properties of its scales.

An investigation last year by the Netherlands-based Wildlife Justice Commission found that in both 2018 and 2019 more than 500 kilograms of shipments each were seized at Noi Bai International Airport in Hanoi and five ports in Ho Chi Minh City, Da Nang, Hai Phong, and Ba Ria-Vung Tau.

The Goldman Environmental Prize is given to six people each year from Africa, Asia, Europe, Islands and Island Nations, North America, and South & Central America.

This year the other five recipients are all women. Gloria Majiga-Kamoto of Malawi has fought the plastics industry and galvanized a movement in support of a national ban on thin plastics.

Kimiko Hirata of Japan has led a campaign that resulted in the cancellation of 13 coal power plants.

Maida Bilal of Bosnia and Herzegovina fought to cancel two proposed dams on the Kruščica River in 2018.

Sharon Lavigne of the U.S. successfully stopped the construction of a $1.25-billion plastics manufacturing plant alongside the Mississippi River in Louisiana.

Liz Chicaje Churay of Peru has fought to create the Yaguas National Park, of which size can be compared as more than two million acres of Amazonian rainforests.

Each of them receives a $200,000 cash prize aside from a bronze sculpture called the Ouroboros, which depicts a serpent biting its tail, a symbol of nature’s power of renewal.