Laos was known as the Land of a Million Elephants (Lane Xang) but the elephant in Laos is now a profoundly endangered species. Some 1000 remain, of which an estimated 500 work in the forest industry harvesting timber. But the harvesting of timber in Laos is diminishing and it’s just a matter of time before this becomes obsolete. This translates into hundreds of jobless elephants.

Keeping an elephant is very costly and labor-intensive.  Above all, it is because elephants need tremendous amounts of food. So, what can be done with these elephants? If answers are not found quickly, elephants may be sold to the highest bidder, or worse. 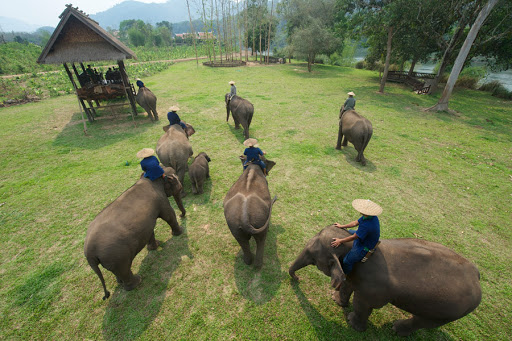 These former logging elephants face a bleak future because they will find themselves on the margin of urban environments with no chance of finding adequate food or water and no access to veterinary care. Some say many of the soon-to-be jobless elephants may even be killed or abandoned to slow starvation.

So, how can their survival be ensured and who is going to take care of them? The tourism industry provides a possible solution.

The aim of Elephant Village Sanctuary is not only to rescue working elephants from the harsh and abusive environments in which they must make their living but also to give them a brighter future by offering quality time or mahout training courses to tourists. This is easy work for elephants and allows them to sustain themselves by earning their own living in a safe and secure environment.

In addition, Elephant Village provides the opportunity for tourists to get to know these very special animals, observe them and spend some time with them. The elephants are allowed to roam freely in the jungle, group together in herds, mate and start new families.

They have access to a professional veterinarian to provide care for the elephants and training for their staff and mahouts, ensuring that the elephants receive ongoing, high-quality medical attention.

Elephant Village also supports the local community and increases people’s well-being while working towards the survival and safety of the elephants. The project employs villagers from Ban Xieng Lom as Elephant Lodge staff, maintenance workers, cooks and guides. A few also train to become mahouts.