Denali's height was recalculated at 20,310 feet in September 2015, based on GPS survey data; And that number was an update to a 2013 estimate of 20,237 feet (6,168 m), which was calculated using a remote-sensing technique called interferometric synthetic aperture radar (InSAR). Both numbers placed Denali's summit lower than the original calculation of 20,320 feet (6,194 m) established in 1953 by Bradford Washburn, a mountaineer, photographer and cartographer. 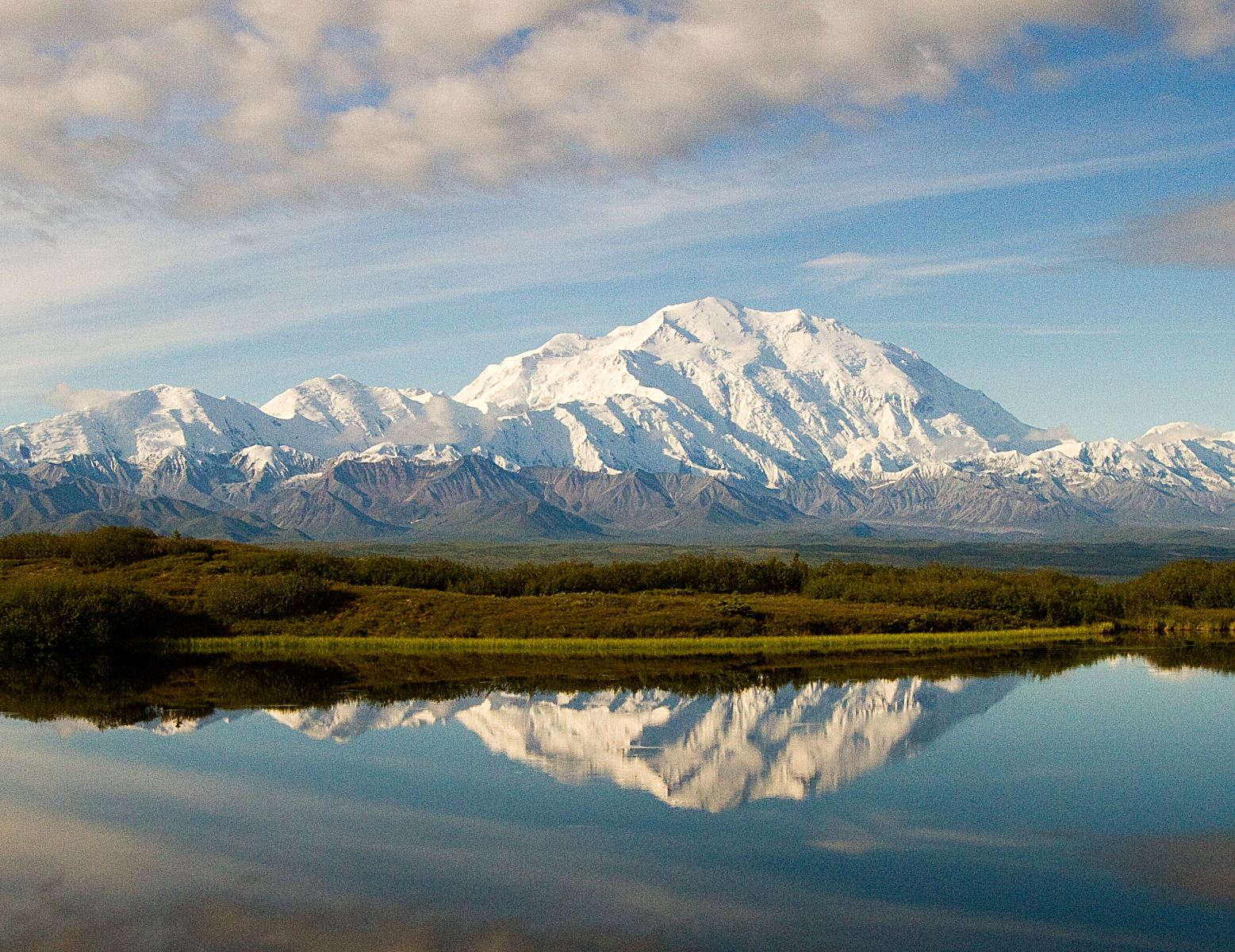 The native Koyukon Athabascan people call the mountain Denali, which is usually translated as "The Great One." However, linguist James Kari of the Alaska Native Language Center at the University of Alaska Fairbanks, wrote in the book "Shem Pete’s Alaska" that the name is based on a verb theme meaning "high" or "tall." 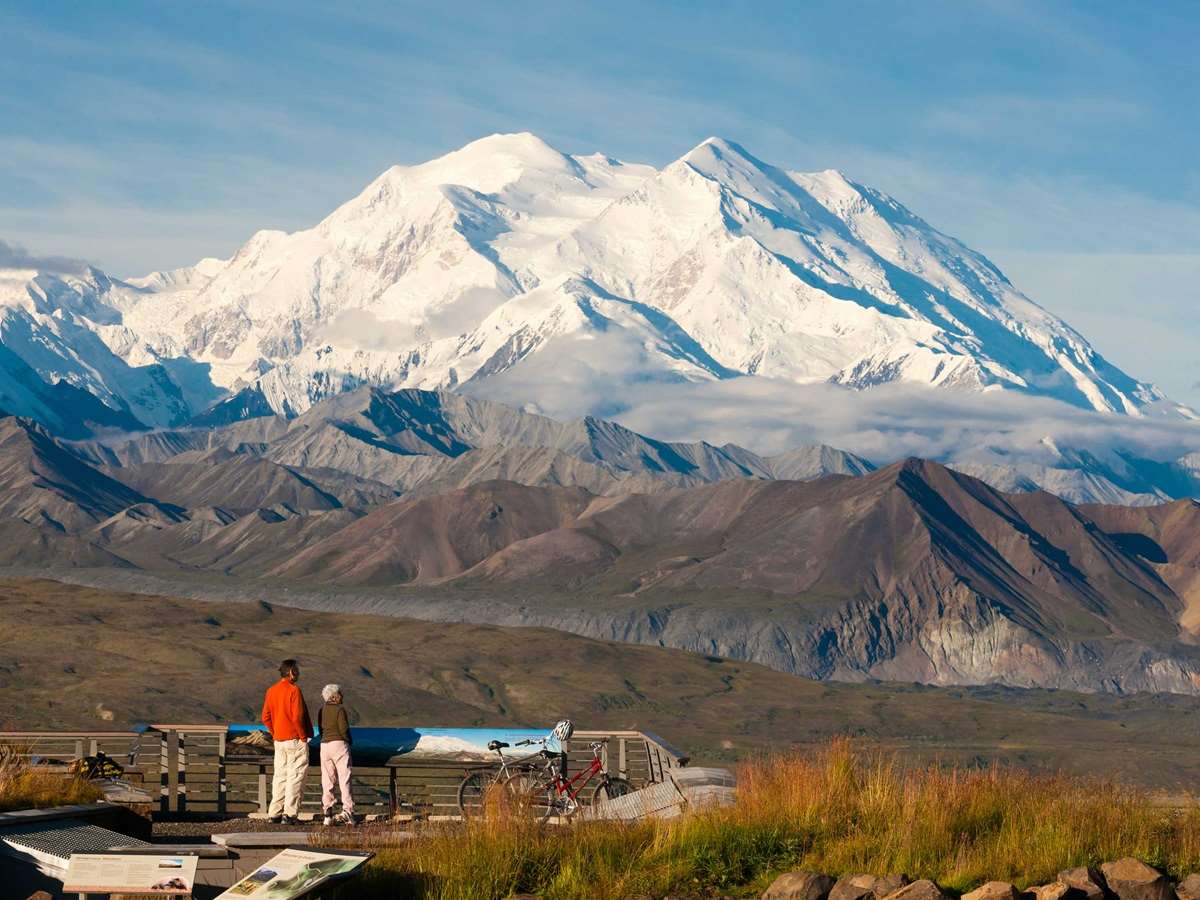 A gold prospector, William Dickey, named it Mount McKinley in 1896, after President William McKinley. Dickey was among a large group of prospectors who were part of the Cook Inlet gold rush. When asked why he chose to name the mountain after then-presidential nominee McKinley, he cited McKinley's support of the gold standard. McKinley, who was from Ohio, never visited his namesake mountain or any part of Alaska.

The park in which the mountain resides was established as Mount McKinley National Park on Feb. 26, 1917. The state of Alaska officially changed the name to Denali in 1975 and asked the federal government to do so too. However, when the park was tripled in size and renamed Denali National Park and Preserve in 1980, the federal government retained the name Mount McKinley, according to the Alaska Dispatch News.

A number of efforts had tried to switch the name to Denali. Hudson Stuck, who made the first ascent of the mountain in 1913, wrote a book titled "The Ascent of Denali." In the preface of the book, he called for "the restoration to the greatest mountain in North America of its immemorial native name." Past attempts were blocked by lawmakers from Ohio.

In August 2015, with President Barack Obama's approval, the U.S. Department of the Interior officially renamed the mountain Denali. According to the Department of Interior, a 1947 federal law gave Secretary Sally Jewell the authority to change geographic names through the U.S. Board on Geographic Names.

Where is Denali?
Denali is about 170 miles (275 km) southwest of Fairbanks and about 130 miles (210 km) north-northwest of Anchorage. It is part of the Alaska Range and the centerpiece of Denali National Park, which covers six million acres (24,281 square km) of land.

While it has long been believed that the Alaska Range, which spans much of south-central Alaska, was formed by tectonic activity, it has remained a mystery until recently because it is more than 300 miles (500 kilometers) from Alaska's southern coast, the closest source of mountain-building activity. A 3D computer model project shed some light on how the low angles and unusual bent in a geological fault further inland combined to form the mountain range.

How tall is Denali?
There is a distinction between measuring "highest" and "tallest." The highest mountain is determined by measuring a mountain's highest point above sea level. The tallest mountain is measured from base to summit. Using that measurement, Denali is taller than Mount Everest. Denali rises about 18,000 feet (5,500 meters) from its base, which is a greater vertical rise than Everest's 12,000-foot rise (3,700 meters) from its base at 17,000 feet (5,200 meters).

In his book, "The Finest Peaks: Prominence and Other Mountain Measures" (Trafford, 2005), Adam Helman wrote, "The base to peak rise of Mount McKinley is the largest of any mountain that lies entirely above sea level." Based on its topographic prominence, or the distance between its summit and lowest contour line, Denali is the third most prominent peak after Mount Everest and Aconcagua in South America.

When Denali was remeasured in 2015, some believed that the mountain was shrinking due to the fact that it was quite a bit shorter than when measured in 1953. Actually, the mountain is growing by about .04 inches (1 millimeter) per year, according to NASA. This tiny but significant growth is due to the continuous impact of the Pacific and North American plates.

Denali's climate
The upper half of Denali is permanently covered with snow and many glaciers, some more than 30 miles (48 km) long. The mountain's extreme cold, which can be minus 75 degrees Fahrenheit (minus 60 degrees Celsius) with wind chill down to minus 118 F (minus 83 C), can freeze a human in an instant. An automated weather station at 18,700 feet (5,700 meters) records temperatures.

More than 400,000 people visit Denali National Park and Preserve each year, primarily between May and September. At the beginning of the 2017 climbing season, around 800 mountain climbers registered with Denali National Park to ascend the mountain. More than 32,000 people have attempted to reach the summit, but only a few reach the top. There was about a 60 percent success rate in 2016.

There are many guides who lead climbing trips to Denali, and it is classified as an extremely challenging expedition due to the severe weather and difficulty in acclimating. Because of its far northern latitude of 63 degrees, Denali has lower barometric pressure than the world's other high mountains.