But recycling paper still takes its toll on the environment, so researchers at Rutgers have come up with a new way to erase ink off a printed page, allowing it to be run through a printer again and again.

In addition to the power and resources needed to operate a recycling plant, all of those recyclable goods have to be trucked across a city using big tricks that are still years away from being completely converted to cleaner fuels.

That’s not to say recycling is a bad thing; there’s just lots of room to improve, and far more ways to reduce our reliance on consumable goods, as researchers at Rutgers University’s Department of Mechanical and Aerospace Engineering have recently demonstrated. 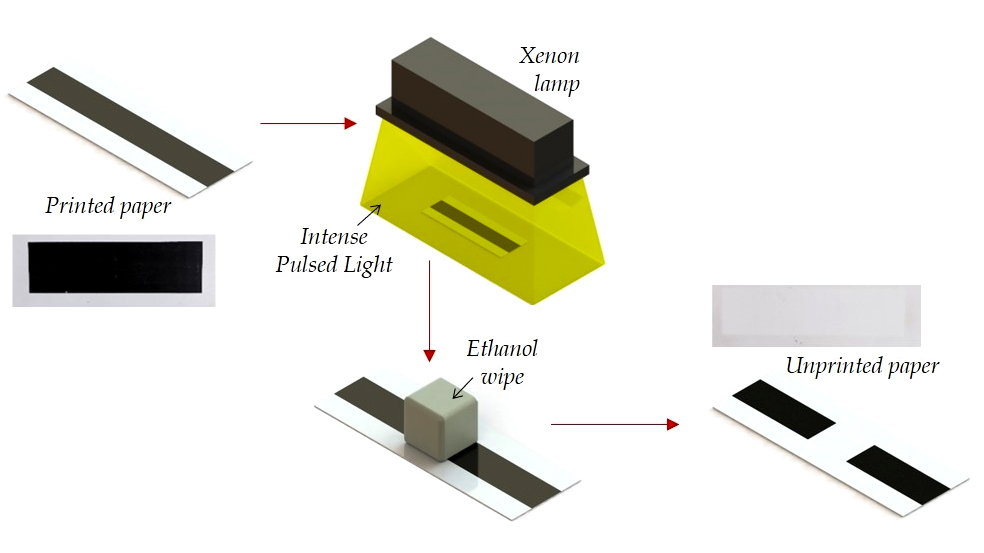 Previous attempts to erase printed pages so they can be reused without recycling either required the use of specially formulated toners that disappeared when heat was applied, or high-powered lasers to instantly vaporize the ink similar to how tattoo removals are performed. But specialized toner and upgrading printers with laser mechanisms aren’t the cheapest solution, and neither approach has seen much adoption in the corporate world yet.

The solution created at Rutgers works with regular old copy paper and the standard toner used in copiers around the world. It also trades lasers for a high-intensity xenon lamp (xenon bulbs are commonly used for vehicle headlights nowadays) that pulses light on to a printed page to help unstick the dried ink on a page. After the light show is over the page can be wiped clean using a small amount of alcohol, like Ethanol, on the unprint head.

The new method does have similar limitations as past unprinting efforts. A page can be erased at least five times before it starts to break down, at which point it’s time to send it off so it can be completely recycled. But that would still represent a significant reduction in both paper use, and the number of photocopies and print outs being sent off for recycling. It also reduces the number of times you have to visit your office’s terrifying paper shredder.