Ceramics production appears to have originated in Binh Duong in the 18th century. Around the beginning of the 20th century, the Lai Thieu region of Binh Duong province emerged as South-East Asia’s central ceramics market due to its accessibility from both land and river. Its importance grew with the arrival of some Chinese potters that came to Binh Duong on trading ships and saw the potential in the available natural resources as local clay, large tree reserves available for firewood and the huge kaolin deposits that could be easily mined. The immigrants from China stopped in at Lai Thieu and built pottery kilns, and local workers and artisans gathered here to produce ceramics items.

However using Chinese technique and very influenced by the Chinese the Vietnamese potters did not copy Chinese ceramics directly; they combined elements in original ways, experienced with new ideas and adopted features from other cultures such as Cambodia and Champa.

Binh Duong ceramic featured a vast range of decorative motifs. Besides the traditional blue pattern ceramics, a new style soon became famous under the name of Lai Thieu cock-figured pottery. It was mostly items for household use such as bowls, dishes, teapots and cups, cooked rice containers with dome shaped tops, bottles, etc.

Binh Duong’s ceramics are fired in chambered and pipe-typed kilns. Through time, products, kiln technology and production processes steadily improved as Binh Duong potters went through successive stages of modernization and mechanization in order to increase productivity as well as the quality of their products.

Lai Thieu pottery from the last century is said to be a fusion of three lines of the southern Chinese ceramics – those from Chaozhou, Guangdong and Fujian. The Chaozhou line includes household commodities like bowls and plates decorated with the images of Bat Tien (the Eight Fairies), or the legendary stories of Chaozhou. The Guangdong line comprises of ornamental pieces including vases and flower pots, while the Fujian line includes vases and small jars which are enameled and painted brown. 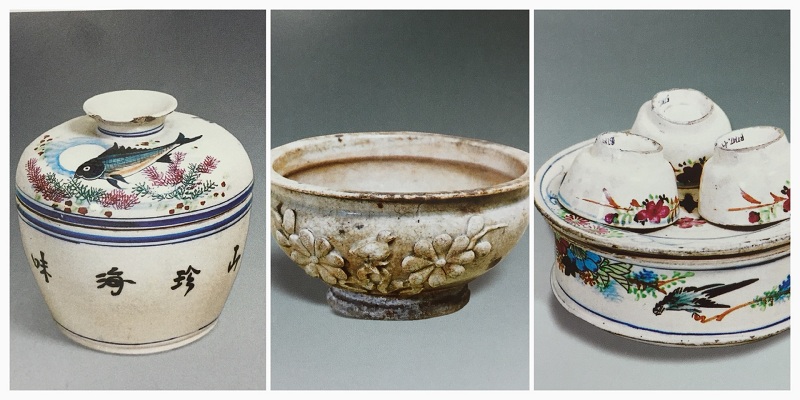 In Vietnam, The Lai Thieu and Southern Household Pottery exhibition, featuring around 639 pieces, was displayed at the HCMC Museum of Fine Arts until the end of May, 2009. Currently, Minh Long 1 Co pottery (also in Binh Duong) is produced using advanced technology and sophisticated equipment.