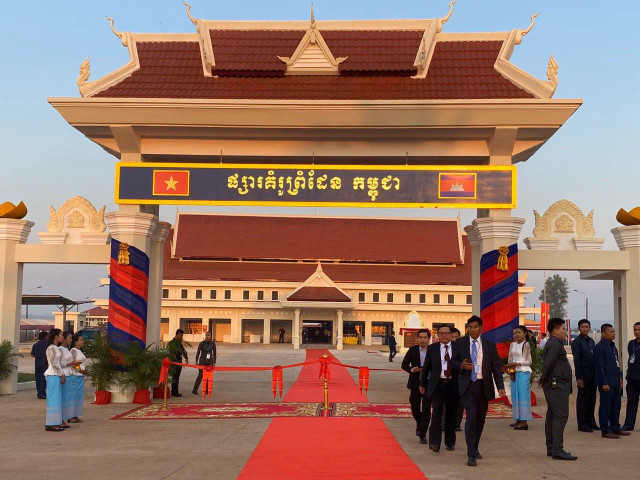 The construction of the market, which was first proposed in 2013, kicked off in January 2018. It is opposite Vietnam’s Chang Riec border gate in Tan Bien district of Tay Ninh province.

The Khmer Times quoted Hun Sen as saying that the market is located at the site of a battle that took place in 1971, adding that Cambodia is seeking a “win-win approach” by turning areas along borders into development or trade hubs.

Mao Thora, secretary of state of Cambodia’s Ministry of Commerce, said the market will help facilitate trade between Cambodia and Vietnam. “It will also play a role in reducing poverty on both sides of the border and help traders build bigger networks,” he said, adding that Vietnamese traders will mostly sell processed foods, while Cambodia will focus on agricultural products.

Vu Quang Minh, the Vietnamese ambassador to Cambodia, previously said the project aims to build up trade infrastructure on the border to promote economic and trade exchanges and raise the living standards of locals.

Minh said it is a place to buy, sell, exchange, and transit goods produced in Kratie, Kampong Cham, Rattanakiri and Mondulkiri to meet demand in Vietnam.

Vietnam-Cambodia trade reached US$4.7 billion in 2018, increasing 24% on-year. The figure is expected to hit US$5 billion this year.