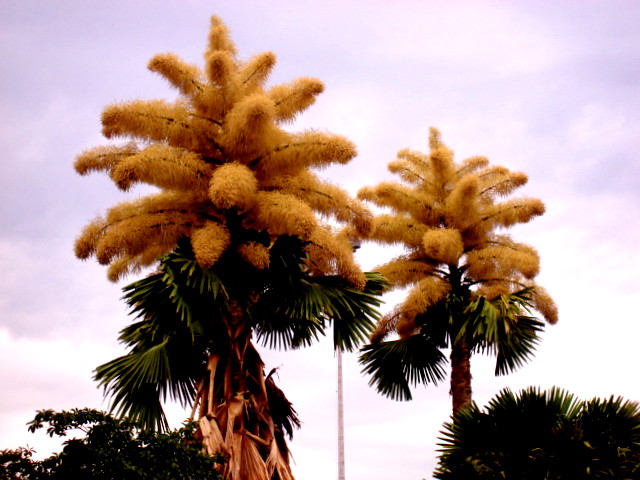 It is one of the largest palms with individual specimens having reached heights of up to 25 m with stems up to 1.3 m in diameter. It is a fan palm (Arecaceae tribe Corypheae), with large, palmate leaves up to 5 m in diameter, with a petiole up to 4 m, and up to 130 leaflets.

The talipot palm bears the largest inflorescence of any plant, 6–8 m long, consisting of one to several million small flowers borne on a branched stalk that forms at the top of the trunk.

The talipot palm is monocarpic, flowering only once when it is 30 to 80 years old. It takes about a year for the fruit to mature, producing thousands of round, yellow-green fruit 3–4 cm in diameter, each containing a single seed. The plant dies after fruiting.

Historically, the leaves were written upon in various South Asian and South-East Asian cultures using an iron stylus to create palm leaf manuscripts. In the Philippines, it is locally known as buri or buli. The leaves are also used for thatching, and the sap is tapped to make palm wine. In South India, the palm leaves are used to make umbrellas for agricultural workers. The tree is known as kudapana in Malayalam, talo in Odia, sreetalam in Telugu and kudaipanai in Tamil, which means umbrella palm. The plant is known as tala in Sri Lanka, by local Sinhalese people.

In Cambodia, the palm is known as tréang (it was also known by the French name latanier), and as noted above was extensively used in the past to write religious manunscripts. In recent times, the leaf has been used by traditional healers and soothsayers. The mature leaves are used to make thatches, mats and hats. The petioles can be used in the manufacture of canes, arrows and netting needles. At low tide, fishers use the fruit to stupefy fish