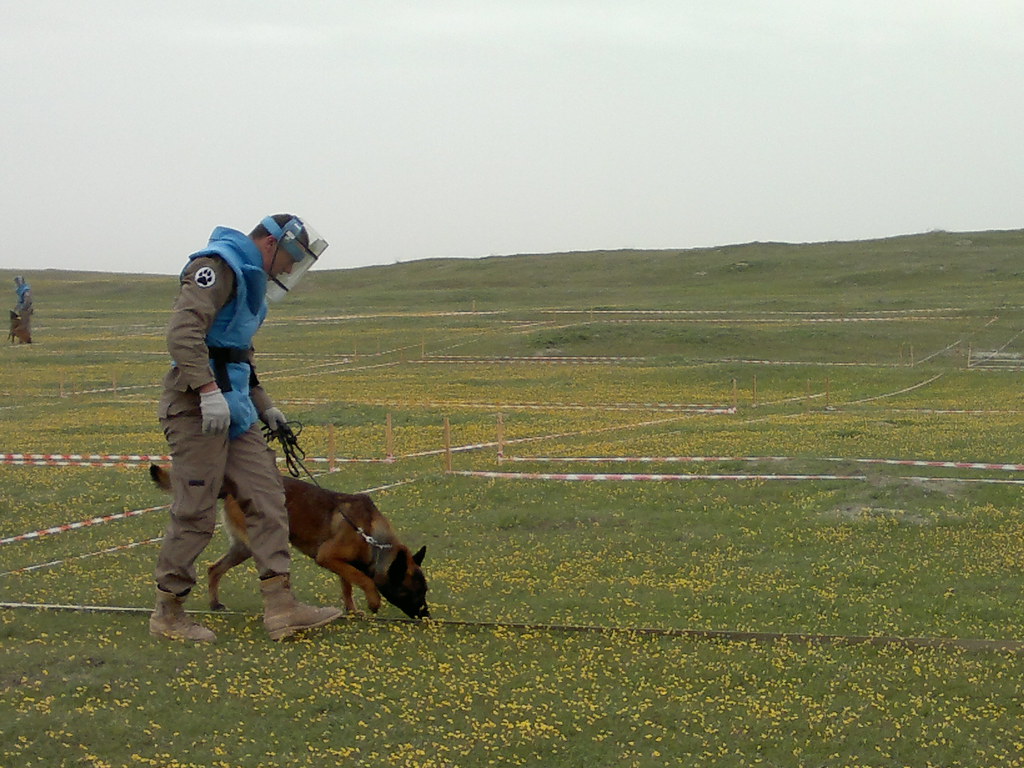 “These dogs have spent their lives travelling the world, finding explosives after wars and saving hundreds of lives. They are heroes,” says Yulia Khouri, who set up the world’s first dedicated centre for retired de-mining dogs and pups who don’t make the cut.

After spending their lives working the minefields of Cambodia and other countries ravaged by war, once their working life is over often the only option for the majority of the highly-intelligent Belgian Malinois is euthanasia.

“They have worked across the world to save thousands of lives and then this is the thanks we give them,” says Khouri, founder of Animal Mama Veterinary Hospital and Pet Wellness Centre.

The seed for the project was planted in 2016, when Khouri took in her first de-mining dog, Murial, who had spent her life in the field and was adopted upon retirement. However, a family tragedy struck and the people she was taken in by were no longer able to care for her.

“There are so many agencies working in Cambodia and there is still tonnes and tonnes of work to be done here to get rid of all of the mines and explosives,” says Khouri. “After we got Murial, I wondered what happens to these dogs when they retire? I started looking into it and was really sad to see what does happen.”

There wasn’t really a solution for those that either became too old for service or flunked out of very demanding bomb-sniffing exams. “To care takes a lot of money,” Khouri says. She reached out to Norwegian People’s Aid, which set up the first canine demining units in Cambodia and offered to accept any dogs they could no longer use. She says she wanted to make sure that “any dog that is born to serve humanity gets the proper conditions of life.” Home of Heroes was born.

So far the organization, which operates solely on donations, has accepted 10 Malinois. Most reside in a large villa with a yard, agility course, pool and staff of seven.

“Once the puppies get to seven- to nine-months-old, they go through vigorous exercise and training and are then tested,” says Khouri. “They can’t make mistakes. They have never made a mistake and it’s understandable that the organisations want to keep it that way.”

However, many of these puppies are either abandoned or given away in an unregulated environment where many families who adopt them fail to realise the responsibility and work that comes with caring for this breed of working dog, who are strong, driven, organised, need lots of exercise and can wrack up costly vet bills.

“The idea behind Home of Heroes is to regulate, monitor, evaluate and provide an environment of safety and respect to these dogs who are brought into this world for one specific reason – to clear the mines,” says Khouri.

Having already offered a home to seven NPA and CMAC dogs – two retired, two disabled, two puppies and one ill canine – Khouri has launched a fundraising drive to build a dedicated retirement centre for the animals in Phnom Penh.

Keen to make it self-sufficient, she is seeking seed funding while also in the process of creating a private security company, providing businesses and homes with top-notch security in the form of dogs passed on from the de-mining organisations and Home of Heroes trained handlers. As well as providing a source of income for the centre, it also gives the dogs the structure they need in their lives.

All of the dogs used will remain the property of Home of Heroes, with the security guards also trained and employed by the organisation.

Another aim is to create a tourist attraction, where visitors can come to the centre and learn about the work carried out by these fearless hounds. A small museum will show the kinds of explosives the dogs are helping to recover.

“In Phnom Penh popular attractions are the Killing Fields and S-21,” says Khouri. “If we included Home of Heroes as the third destination in this circuit, it gives people the chance to see that there is an active community working to clear the country of the reminders of the war.”

Khouri says there will be no adoption available for the dogs, however, selected foster care programmes will run for those animals deemed suitable as pets. Foster families will need to bring the dog in for regular checks and must be able to prove they can offer the animals the lifestyle they need, as well as afford to fund their diet and medical needs.

“These dogs not only work in Cambodia, but they also fly all over the world to places like Israel, Iraq, Columbia, Sierra Leone to work on the front line,” says Khouri. “They deserve to live out their days with dignity and comfort.”

According to ozy.com and asialifemagazine.com