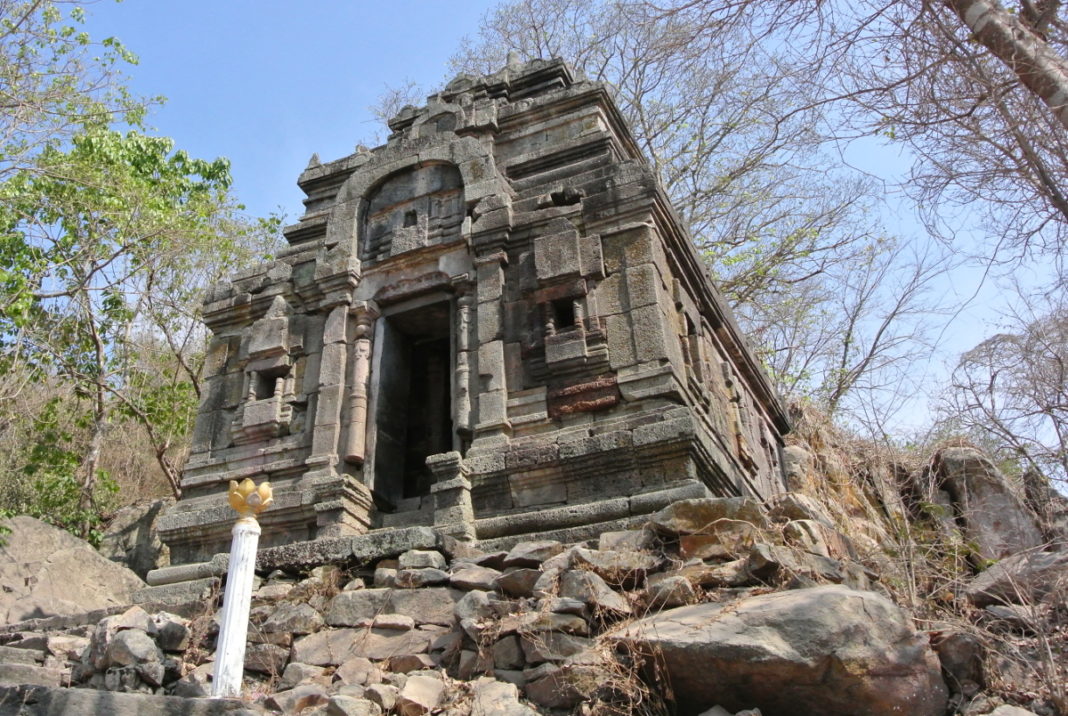 Phnom Da is a cultural, historical site that has been renovated to provide visitors a place to relax or research Cambodian history. The scenery is beautiful all year. In the rainy season, there is a vast water basin that produces lush, green rice paddies during the dry season.

Phnom Da temple was built on the top of a small hill in the 6th century by King Rutravarman, who reigned during the Norkor Phnom period, according to the French historian Mibreno. The temple is 12 meters square and 18 meters high. It was constructed of laterite, brick and sandstone. A Brahman temple, it faces north towards Norkor Kork Thalork, which was the capital of Nokor Phnom at the time the temple was built. There is no rampart.

The temple’s peak is damaged, and a sculpture depicting the story of Churning of the Ocean of Milk(Cambodian calls Ko Samutra Teuk Dos) has been broken into two parts. A lintel illustrates the figure of sleeping Vishnu. There are false doors on three sides and a rear door that opens on the north side.

In the flank of the hill are five man-made caves that reflect the style of Phnom Da, which is similar to Indian style. In each cave, there is a Shiva lingam and Uma yoni, objects that Brahmans worship. During the Pol Pot regime, between 1975 and 1979, the caves were used as cremation places by the Khmer Rouge.

About 300 meters southwest of the temple is another smaller temple known as Asrom Moha Eysei. Built at the end of the 6th century in Zhenla Period, during the reign of King Pavavarman I, the temple has five windows and two doors. It is 5.5 meters square and 7 meters high, it is built in the Indian style and features a double wall of basalt that faces north. In 1992, a number of clergymen and nuns built a pagoda south of the hill. It is called Phnom Da pagoda.Nearly three decades of war have left the road from Phnom Chiso to Angkor Borei district in poor condition; during the rainy season, flooding makes it impassable. Nevertheless, the site attracts foreign tourists and many Cambodians interested in researching Cambodian history during the Koh Kork Thlork Period.

After 1979, the Takeo provincial authority constructed a canal, Canal 15, which links Takeo provincial town to Angkor Borei district. This has made access easier since the road between Angkor Borei and Phnom Da is still difficult to travel, especially during the rainy season, when it floods.