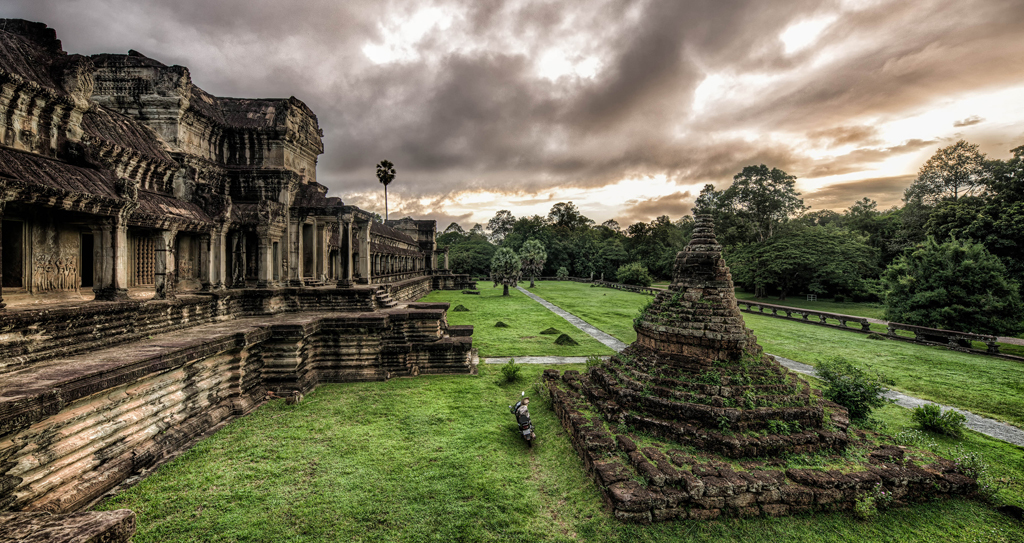 Angkor Archaeological Park was declared a UNESCO World Heritage site in 1992. At the same time, it was also placed on the List of World Heritage in Danger due to looting, a declining water table, and unsustainable tourism. UNESCO set up a wide-ranging program to safeguard this symbolic site and its surroundings.

For several centuries, Angkor was the centre of the Khmer Kingdom. With impressive monuments, several different ancient urban plans and large water reservoirs, the site is a unique concentration of features testifying to an exceptional civilization. Temples such as Angkor Wat, the Bayon, Preah Khan and Ta Prohm, exemplars of Khmer architecture, are closely linked to their geographical context as well as being imbued with symbolic significance. The architecture and layout of the successive capitals bear witness to a high level of social order and ranking within the Khmer Empire. Angkor is, therefore, a major site exemplifying cultural, religious and symbolic values, as well as containing high architectural, archaeological and artistic significance.

The property is legally protected by the Royal Decree on the Zoning of the Region of Siem Reap/Angkor adopted on 28 May 1994 and the Law on the protection of the natural and cultural heritage promulgated on 25 January 1996, the Royal Decree on the creation of the APSARA National Authority (Authority for the protection of the site and the management of the Angkor Region) adopted on 19 February 1995, the No. 70 SSR government Decision, dated 16 September 2004 providing for land‐use in the Angkor Park: “All lands located in zone 1 and 2 of the Angkor site are State properties”, and the sub-decree No. 50 ANK/BK on the organisation and functioning of the APSARA National Authority adopted on 9 May 2008, specifically provided for the establishment of a Department of Land‐use and Habitat Management in Angkor Park.

As of 1993, the ICC-Angkor (International Coordinating Committee for the Safeguarding and Development of the historic site of Angkor) created on 13 October 1993, ensures the coordination of the successive scientific, restoration and conservation-related projects, executed by the Royal Cambodian Government and its international partners. It ensures the consistency of the various projects, and defines, when necessary, technical and financial standards and calls the attention of all the concerned parties when required. It also contributes to the overall management of the property and its sustainable development.

The successful conservation of the property by the APSARA National Authority, monitored by the ICC-Angkor, was crowned by the removal of the property from the World Heritage List in danger in 2004.

Angkor Archaeological Park is one of the largest archaeological sites in operation in the world. Tourism represents an enormous economic potential but it can also generate irreparable destructions of the tangible as well as intangible cultural heritage. Many research projects have been undertaken since the international safeguarding program was first launched in 1993. The scientific objectives of the research (e.g. anthropological studies on socio-economic conditions) result in a better knowledge and understanding of the history of the site, and its inhabitants that constitute a rich exceptional legacy of the intangible heritage.

Moreover, the Angkor Archaeological Park is very rich in medicinal plants, used by the local population for the treatment of diseases. The plants are prepared and then brought to different temple sites for blessing by the gods. The Preah Khan temple is considered to have been a university of medicine and the NeakPoan an ancient hospital. These aspects of intangible heritage are further enriched by the traditional textile and basket weaving practices and palm sugar production, which all result in products that are being sold on local markets and to the tourists, thus contributing to the sustainable development and livelihood of the population living in and around the World Heritage site.