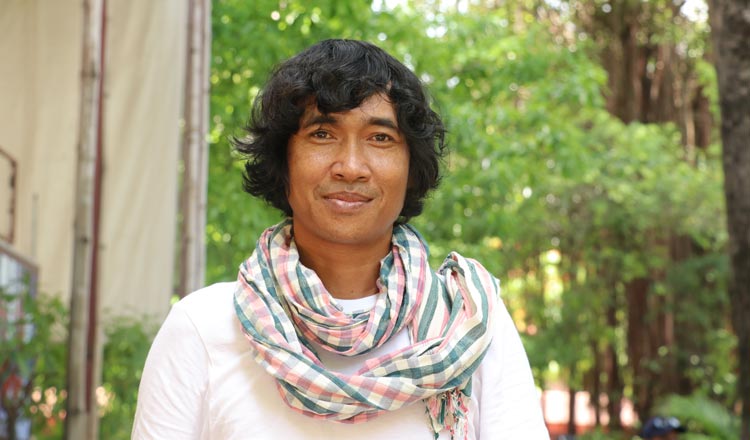 Lakhorn Niyeay or Spoken Theatre was once a popular art in the Kingdom in the 1940s. The performance art is solely based on the characters’ speeches and the storylines usually depict deep social issues of the present time.

But during the chaotic and tragic years, Lakhorn Niyeay lost its glory. Nobody wanted to practice it, scared of getting punished or killed for devoting to an art form instead of following the orders of the dark regime. Even after the civil war, people hesitated to look back.

Lakhorn Niyeay isn’t an easy art. In fact, it takes almost ten years to master it – to learn how to perform, write script and direct. And even when you’ve mastered it, it does not guarantee a good career or a sustainable source of income.

Soung Sopheak is a playwright and director who is passionate about art and Lakhorn Niyeay. To keep Lakhorn Niyeay alive and promoting art as a form of mental healing, in 2015, he founded Khmer Art Action (KAA).

“It all started when I decided to pursue the theatre major at the University of Fine arts of Cambodia. I am so passionate about Cambodian arts, customs, perspectives which unexpectedly aspire me to become a theatre director. What fascinated me the most is that each aspect of Cambodian arts has its own unique story and journey to tell. They describe our gentleness, respect, politeness, obedience and more importantly how honest we are as human beings.”

Sopheak doesn’t get much from his advocacy. In fact, he spends his own money to ensure that his scripts reach the performance stage and that the art form is kept alive.

“Not too many artists are committed enough to last in this industry. One needs to have strong love and to be dedicated in preserving this art to be able to continue. And unfortunately, the public’s not really very supportive of this art. Even the government and relevant ministries don’t give us the support we deserve,” explains Sopheak on why Lakhorn Niyeay has never completely prospered despite huge efforts.

“I wish I could have many bodies because I am alone in dealing with just about everything including financial and other management affairs. It is tiring, but after a long day, I take pride in all our achievements over the years.”

He is now working on connecting to more people, young ones especially, to love and help preserve spoken theatre.

Sopheak thanks his father for allowing him to study the art in Phnom Penh more than decade ago. Though it’s not making him rich, it enables him to contribute something to his community.

“I was just a countryside boy who never cared about anything in the society before I started learning about this art. But as spoken theatre always picks societal issues, I started to care and asked myself how I can be one of the solutions.