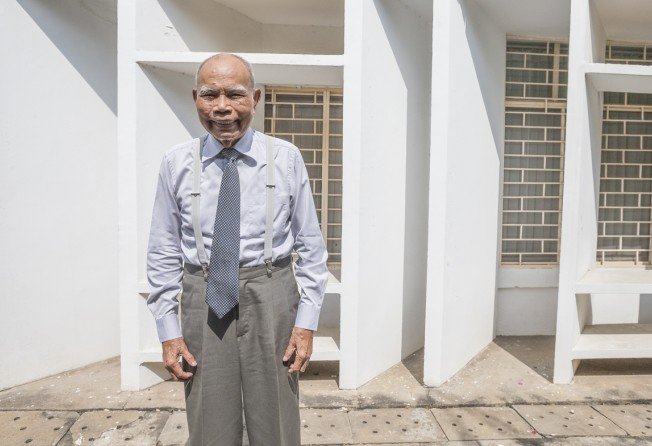 Vann Molyvann was born in Kampot province in 1926. In 1946, he was awarded a scholarship to study in France. He studied architecture along with other arts at Paris’s Ecole Nationale Supérieure des Beaux-Arts (School of Fine Arts) and returned to a newly independent Cambodia in 1956. Soon after, he was appointed by Prince Norodom Sihanouk as a state architect. He went on to design many of Cambodia’s most ambitious and well-known public projects, constructed as part of the nationwide modernization heralded by Sihanouk’s Sangkum Reastr Niyum (“People’s Socialist Community”) regime. He also designed numerous private homes and smaller structures during this period.

In addition to his extensive work as an architect, Vann Molyvann was also an urban planner and oversaw the expansion of Phnom Penh as well as the establishment of the sea-port at Sihanoukville (Kampong Som), among other sites. Furthermore, he was also involved in the leadership of Phnom Penh’s Royal University of Fine Arts, and published several articles on Cambodia’s modernization in Khmer journals. He is popularly remembered as one of the most prominent figures in the active cultural life of Cambodia’s post-Independence period.

Following the military coup in 1970 that overthrew Sihanouk and his regime, Vann Molyvann relocated to Switzerland. In the following decades, he continued his work with the United Nations Human Settlements Program in developing countries internationally.

In 1991, Vann Molyvann returned to Cambodia and was appointed as Minister of Culture, Fine Arts, Town and Country Planning. He was instrumental in the establishment of the APSARA Authority, a collaborative multi-party organization intended to oversee research into and administration of the ancient temples of Angkor Wat. He also continued his research, publishing several books and completing a doctorate on the history of human settlements in Southeast Asia.

In 2013, Vann Molyvann won Nikkei Asia Prize 2013 in the culture category. His works on famous landmarks such as the Olympic Stadium and the Independence Monument were highly recognized.  Nikkei Asia Prizes was launched by Nikkei Inc. in 1996, the awards program honours people in Asia who have made significant contributions in three areas: regional growth, science, technology and innovation, and culture.

So profound was his legacy, in 2017 he had a documentary dedicated to him called The Man Who Built Cambodia.

According to en.wikipedia.org and vannmolyvannproject.org