Born in Savannakhet, Laos in 1961, Vong Phaophanit was educated in Paris and later studied at the Ecole des Beaux Arts, Aix en Provence, in France. He met and married Claire Oboussier while they were both still students. He moved to the UK in 1985 and became a British citizen in 1993. In the UK, he began to experiment with a wide range of media subsequently exhibiting widely nationally and internationally. 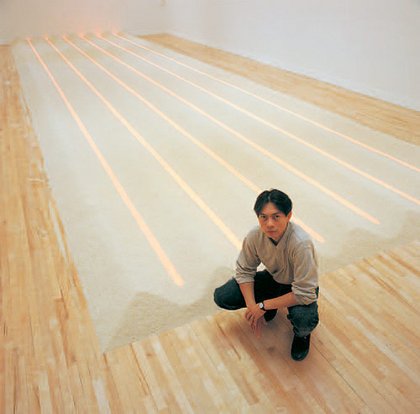 In 1993 he was short-listed for the Turner Prize and in 1994 was awarded the DAAD fellowship in Berlin. He has been a visiting lecturer at Chelsea College of Art, Wimbledon School of Art, The University of East London and Exeter College of Art and was also a senior fellow in drawing at Wimbledon School of Art. In 1998 he was nominated for the Paul Hamlyn Prize and in 2002 was the award winner of the Art and Work Award for site-specific work with Gensler Architects.

His work is held in major collections around the world including the Tate Britain, London; The Irish Museum of Modern Art, Dublin; The British Council Collection, London; and The Arts Council Collection, London. His most recent exhibitions were at Shanghai Biennale 2004; Void Gallery in Derry in 2005; The Quiet in the Land, Luang Prabang in 2006; and Gropius Bau Museum, Berlin (‘The Tropics’) in 2008.