He is the first Laotian American to receive a Fellowship in Literature from the United States government’s National Endowment for the Arts. He received the Science Fiction Poetry Association Elgin Award for Book of the Year in 2014. He was selected as a Cultural Olympian representing Laos during the 2012 London Summer Olympics. He is the first Asian American president of the International Science Fiction and Fantasy Poetry Association, and the first Laotian American member of the professional Horror Writers Association.

Thao Worra’s writing explores many themes including transience, identity and home. His style is frequently experimental and draws from a variety of modern and contemporary influences, including science fiction and horror. 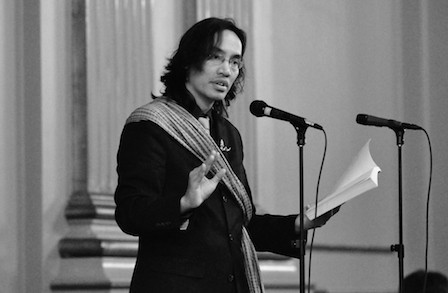 He was an active member of the SatJaDham Lao Literary Project, working to promote the work of Laotian and Hmong artists and writers. Thao Worra organized several public readings and exhibitions of Laotian and Asian American artists in Minnesota, including Emerging Voices (2002), The Five Senses Show (2002), Lao’d and Clear (2004), and Giant Lizard Theater (2005).

Thao Worra often writes as a freelance reporter for several Asian American newspapers including Asian American Press, interviewing numerous Asian American artists and covering community events. He is a regular contributor to the Twin Cities Daily Planet. He has written op-ed columns for the Pioneer Press and community newspapers, primarily on Asian American subjects. He is also a frequent writer for Little Laos on the Prairie, a Minnesota-based Lao American online publication.

Bryan Thao Worra holds over 20 awards for his literary work and community service, including his arts leadership. In 2009, Thao Worra became the first Laotian American writer to receive a fellowship in literature from the United States government’s National Endowment for the Arts to continue his work as a poet. NEA Literature Fellowships are awarded to published creative writers of exceptional talent in the areas of prose and poetry to advance the goal of encouraging and supporting artistic creativity and preserving the diverse cultural heritage of the United States.

He was recognized in 2009 by the State Council on Asian Pacific Minnesotans with the Asian Pacific Leadership Award for Excellence in the Arts. In 2010, he was recognized by the Lao Professionals of Elgin, Illinois with their Literacy Award at the 2010 Lao Artists Festival. In 2014, his poetry collection DEMONSTRA received the Science Fiction Poetry Association’s Elgin Award for Book of the Year. In 2015, NBC News highlighted him in their feature “National Poetry Month: Asian-American Poets to Watch.” In 2017, he was the first Artist-In-Residence for the University of California Merced’s Center for the Humanities. Thao Worra was named a Joyce Award winner in 2019 and was awarded $50,000 in conjunction with the Lao Assistance Center to produce Laomagination: 45, an exhibition presenting multi-generational stories of the Lao community.