As a vision of Youk Chhang, a human rights activist and investigator of the Khmer Rouge atrocities, the Sleuk Rith Institute was founded by Chhang as a focus for reflection, healing and reconciliation as well as an enlightening educational facility dedicated to commemorating the lives of the past by building a better future. The institute will house the Documentation Centre of Cambodia’s one million documents in its archives. And as the largest collection of genocide-related material in Southeast Asia, will become a global center for education and research into the documentation, causes and prevention of genocide.

The brief required a direction that breaks from some of the stereotypes associated with genocide memorial architecture. “In the context of genocide and mass atrocity, memorial architecture has tended to reflect the evil and misfortune of the historical period it represents,” he says. “In this sense, the architecture’s legacy is dark, somber, and firmly oriented to the past.”

“We were keen to create a forward-looking institute that deviates from the distress-invoking, quasi-industrial, harshness of the most existing genocide memorial models. This is not to criticize or denigrate such models but, instead, to emphasize that in light of Cambodia’s rich cultural and religious traditions, we must move in a different and more positively oriented direction.” 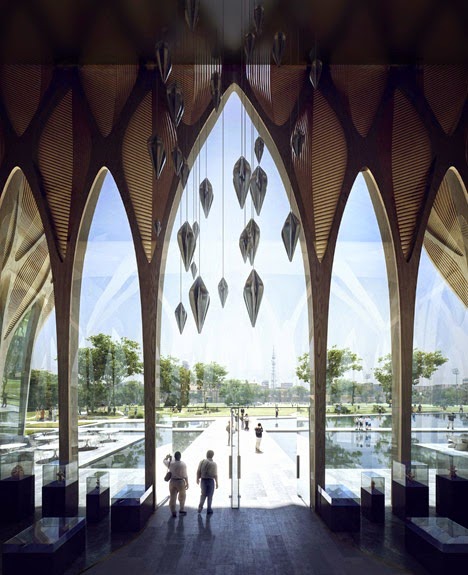 The design is organized as five wooden structures that are separate volumes at ground level, but interweave and link together as they rise upwards; connecting the different departments, visitors, students and staff within a singular whole. With an overall footprint of 2400 sqm at the base and 3 344 sqm, the structure range from three to eight storeys, each of the five buildings will house a different function: the Sleuk Institute;  a library holding the largest collection of genocide-related material in Southeast Asia;  a graduate school focussing on genocide, conflicts and human rights studies; a research center and archive to influence national and regional policies and discourse; a media centre and an auditorium that can be used by the institute and the entire community.

Constructed from sustainably harvested timber, the primary structure, exterior shading and interior partitions give natural scale, warmth and materiality. The more complex forms have been designed and engineered to be assembled from the economical straight and single-curved timber sections with established technologies. And to accommodate Cambodia’s tropical climate, the narrower lower levels of the institute are shaded by the building’s form, while louvers on the upper levels keep out strong sunshine. Located at the confluence of the Mekong and Tonlé Sap Rivers, the institute’s buildings will be built on raised terraces, to protect from Phnom Penh’s seasonal flooding.

The institute includes a 68 000 sqm memorial park for the entire community with sports fields, an urban vegetative garden and fruit orchards, traditional meadows and a forest that will house contemporary Cambodian sculptures, many of these commemorating the women that helped to rebuild the country. The park slopes away from the building to provide further protection against seasonal flooding; with the southern end of the park landscaped to become a large retention pool during heavy monsoon rains.